The main motivation of Expand is to build a parallel file system for heterogeneous general purpose distributed environments. To satisfy this goal, we use Network File System (NFS).

NFS  supports the NFS protocol, a set of remote procedure call (RPC) that provides the means for clients to perform operations on a remote file server. NFS protocol is operating system independent. Developed originally for being used in networks of UNIX systems, it is widely available today in many systems, as LINUX or Windows 2000, two operating systems very frequently used in clusters.

Figure 1 shows the architecture of Expand. This architecture shows how multiple NFS servers can be used as a single file system. File data are declustered by Expand among all NFS servers, using blocks of different sizes as stripping unit. Processes in clients use an Expand library to access an Expand distributed partition. 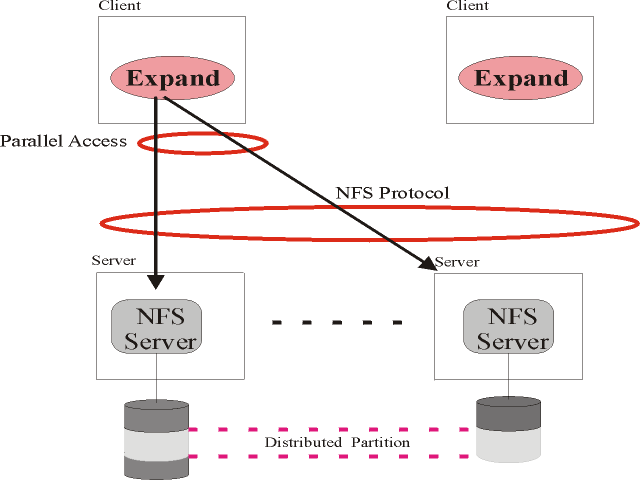 Expand provides high performance I/O exploiting parallel accesses to files stripped among several NFS servers. Expand is designed as a client-server system with multiple NFS servers, with each Expand file striped across some of the NFS servers. All operations in Expand clients are based on RPCs and NFS protocol. The first prototype of Expand is a user-level implementation, through a library that must be linked with the applications. Expand provides a global name space in all cluster.

To provide large storage capacity and to enhance flexibility, Expand combines several NFS servers to provide a generic stripped partition which allows to create several types of file systems on any kind of parallel I/O system.

Each server exports one o more directories that are combined to build a distributed partition. All files in the system are declustered across all NFS servers to facilitate parallel access, with each server storing conceptually a subfile of the parallel file.

A design goal, no implemented in the current prototype, is to allow that a partition in Expand can be expanded adding more servers to an existing distributed partition.This feature increases the scalability of the system and it also allows to increase the size of partitions. When new servers are added to an existent partition, the partition must be rebuilt to accommodate all files. Conceptually, this rebuilding will be made using the following idea:


In this algorithm, when a file is copied into the new partition, the new file is declusterd across all NFS server of the new partition. To implement this expansion, algorithms must be designed to allow a redistribution of data without integrally copying files.

The Structure of Expand Files

A file in Expand consists in several subfiles, one for each NFS partition. All subfiles are fully transparent to the Expand users. Expand hides this subfiles, offering to the clients a traditional view of the files. This idea is similar to the used in PVFS.

On a distributed partition, the user can create in the current prototype  stripped files with cyclic layout. In these files, blocks are distributed across the partition following a round-robin pattern. This structure is shown in Figure 2. Each subfile of a Expand file as a small header at the beginning of the subfile. This header stores the file's metadata. This metadata includes the following information:

All subfiles has a header for metadata, although only one node, called  master node (described below) stores the current metadata. The master node can be different from the base node. 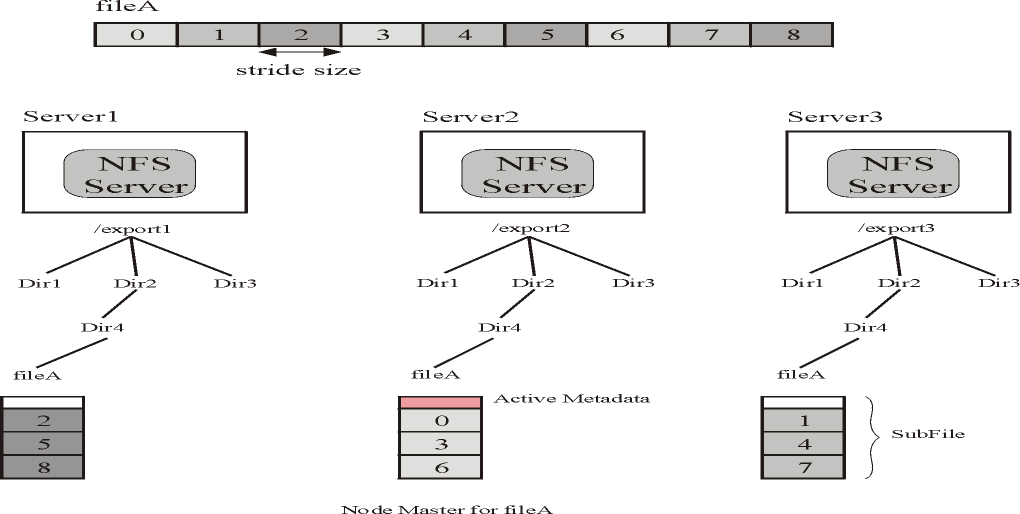 To simplify the naming process and reduce potential bottlenecks, Expand does not use any metadata manager, as the used in PVFS . Figure 3 shows how directory mapping is made in Expand. The Expand tree directory is replicated in all NFS servers. In this way, we can use the lookup operation of NFS without any change to access to all subfiles of a file. This feature also allows access to fault tolerance files when a server node fails.

The metadata of a file resides in the header of a subfile stored in a NFS server. This NFS server is the  master node of the file, similar to the mechanism used in the Vesta Parallel File System. To obtain the master node of a file, the file name is hashed into the number of node:

Because the determination of the master node is based on the file name, when a user renames a file, the master node for this file is changed. The algorithm used in Expand to rename a file is the following:

This process is shown in Figure 4. Moving the metadata is   the only operation needed to maintain the coherence of the base node system for all the Expand files.

To enhance I/O, user requests are split by the Expand library into parallel subrequests sent to the involved NFS servers. When a request involves k  NFS servers, Expand issues k requests in parallel to the NFS servers, using threads to parallelize the operations. The same criteria is used in all Expand operations. A parallel operation to k servers is divided in k individual operations that use RPC and the NFS protocol to access the corresponding subfile.

Expand offers two different interfaces. The first interface is based on POSIX system call. This interface, however, is not appropriate for parallel applications using strided patterns with small access size. Parallel applications can also used Expand with MPI-IO. Expand have been integrated inside ROMIO  and can be used with MPICH (see Figure 5). Portability in ROMIO is achieved using an  abstract-device interface for IO (ADIO). 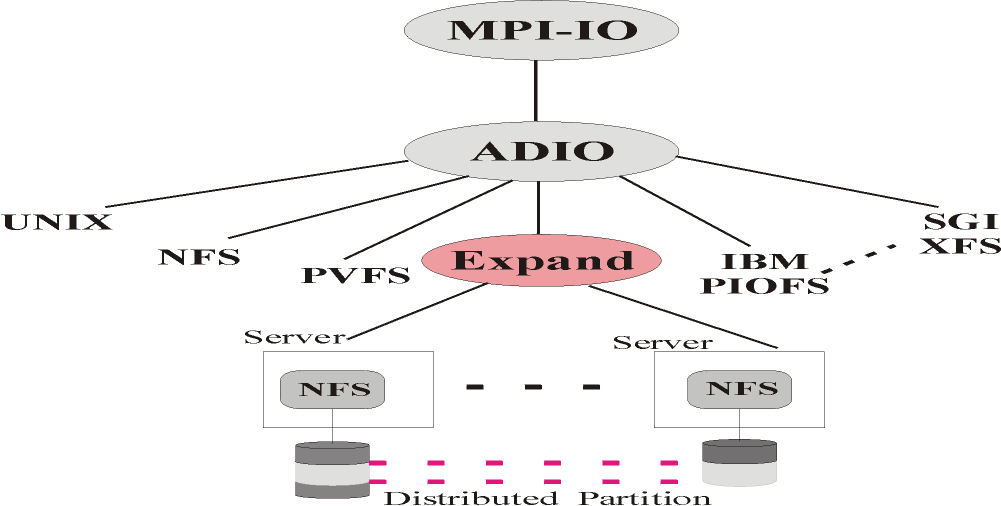 ADIO  is a mechanism specifically designed for implementing parallel-I/O APIs portably on multiple file systems. ADIO consists of a small set of basic functions for parallel I/O. The ROMIO implementation of MPI-IO use the ADIO to achieve portability. The ADIO interface implemented for Expand includes:

In this section we show the results obtained in Expand with MPI-IO using two workloads:

In the strided access tests, multiple noncontiguous regions of the data file were simultaneously accessed by each process. We used a
file of 100 MB and different access size (from 128 bytes to 4MB).

The out-of-core matrix multiplication assumes a NxN matrix. This implementation doesn't do anything fancy with memory management and simply assumes that each processor can hold 3N elements (each element is the type double) in core at one time: 2N elements for matrices A and B, and N elements for matrix C. The multiplication process is shown in Figure 6. This is the algorithm using MPI-IO. All matrix are stored in disks is row order.

The platform used in the evaluation was a cluster with 8 Pentium III biprocessors, each one with 1GB of main memory, connected through a Fast Ethernet, and executing Linux operating system (kernel 2.4.5). All experiments have been executed on Expand (XPN in figures) and PVFS using MPI-IO as interface. For both parallel file system, we have used 8 I/O servers. The  block size used in all files, both in Expand as PVFS tests, has been 8 KB. All clients have been executed in the 8 machines, i.e: all machines in the cluster have been used as server and clients.

The results for strided accesses are shown in Figure 7. Graphics show the aggregated bandwidth obtained for write operations and read operations for 4, 8, and 16 processes and different access size.

Figure 8 shows the performance obtained in the out-of-core matrix multiplication. These figures shown the time in seconds needed to multiply matrix of different sizes using several processes (4, 8, 16 and 32 processes). In general, the performance obtained in Expand scale better with the number of processes. As we can see in the figures, the time needed is increased considerably when N increase, because all matrix are stored in row order. The algorithm used read, however, the Matrix B in column order. This provokes many internal seek operations to read the whole matrix.